Last week, the Austin Public Library Friends Foundation welcomed Kevin Powers, author of The Yellow Birds, back to Austin (where he graduated last year from the UT Michener Center for Writers) to kick off the 2013 Mayor’s Book Club. The day started at the Austin History Center with a conversation between Powers and Chris Leche, editor of Outside the Wire: American Soldiers’ Voices from Afghanistan. Powers later led a workshop at the Hampton Branch Library, where he spent the afternoon discussing craft and process. That night, Mayor Lee Leffingwell welcomed Powers at the AT&T Education & Conference Center for a reading and discussion with the director of the UT Michener Center, Jim Magnuson. Before returning home the following day, Powers stopped by McCallum High School to speak with students about his work as a writer, his now acclaimed novel, and his experiences in the military.

In case you missed him, two of our volunteers, Aaron Parker and Cory Mac Pherson, offer these reflections on what they learned during Powers’s visit. 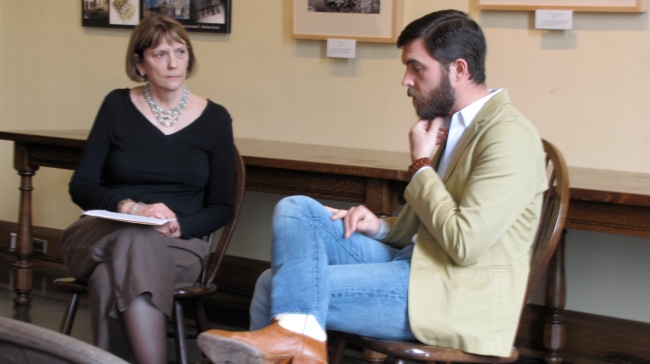 Aaron Parker on Powers’s visit to the Austin History Center

The Austin History Center was an appropriate and evocative place for Kevin Powers to answer questions about his debut novel, The Yellow Birds. Hearing Powers discuss his novel with Chris Leche, who’s taught creative writing to soldiers in Afghanistan, put the story in a wider context. Powers’s comments, delivered in the History Center, dovetailed nicely with the library’s mission to store the knowledge and experiences of mankind.

The cynical adage is that war is how Americans learn geography. But Powers’s novel goes much further, focusing on the oft-overlooked effects of war on its survivors. He takes on the laudable goal of humanizing history through his story. It is certainly an effort worth saving for future generations.

I am a poet. I am familiar with the focus and precision poetry requires, how afternoons can be lost searching for the perfect word based on sound, syllable count, and meaning. One of my shortcomings as a writer is holding focus for longer works, so I was excited to hear Kevin Powers’s insights, not only because he’s the author of a beautiful novel, but because he is also a fellow poet. Here are some of the tips he shared that I found most helpful:

1. Ask yourself, “What is the scope of the story I’m trying to tell?”

If you don’t have an endpoint or boundaries to your story, writing it can be overwhelming. By defining the scope of your story, you can then take the scenes or moments within it and focus on them and how they are working to tell the story. Powers also encourages writers to use variation both in our storytelling methods and in the information we are conveying to keep the story fresh and the readers engaged.

2. “Train yourself to be disciplined to language.”

Powers explained that writers have a tremendous amount of control over the reader through word choice and pacing. For example, using longer, lyrical sentences and words can help  develop an emotional or sentimental part of the story, while short, harsh words and sentences can portray a more factual or cold part of the story. Paying attention to word choice on the “micro” level is a powerful storytelling mechanism and resonates on the larger, “macro” level of the story.

It was a relief to hear Powers confess he isn’t constantly gushing with inspiration. He said the days when he spends eight hours at his desk and writes two sentences are just as important as the days when he writes ten pages. His advice for getting through those dry spells is to be disciplined about writing so that you’re equipped when inspiration does come.

I’m currently gearing up to go back to school in the fall (a creative writing graduate program), and reading The Yellow Birds inspired and reinvigorated me. Powers focuses on how every word resonates through the whole story so that each paragraph feels complete within itself, like a poem. I hope to use the same attention to detail when working on my own poetry. Although I’m not the most prolific poet, Powers’s sense of discipline and his honesty about not always having brilliant writing days was encouraging and will make the days I’m sitting at the desk with two sentences a little bit easier.